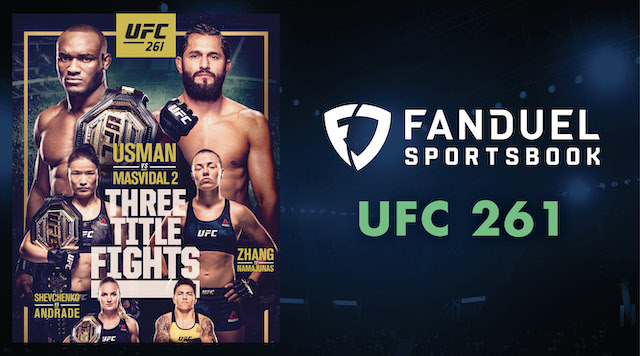 Join us in our FanDuel Sportsbook for all the action of UFC 261, with three world titles on the line you won't want to miss it!

In the main event, welterweight champion Kamaru Usman will face Jorge Masvidal in a rematch of their UFC 251 fight, which was won by Usman. Masvidal stepped up on short notice for the fight, one of the first events of the COVID era held on "Fight Island" in Abu Dhabi. Masvidal stepped in when Gilbert Burns was forced off the card due to the virus, but saw his offensive output entirely neutralized by the grappling of Usman.

In the other two championship bouts, Weili Zhang will put the women's strawweight title on the line against top contender Rose Namajunas and women's flyweight champ Valentina Shevchenko will battle Jessica Andrade.

Program and times subject to change.